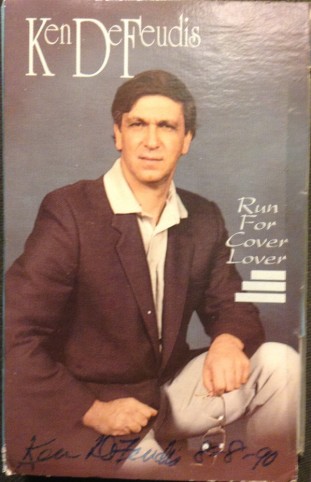 As any connoisseur of outsider, kitsch & oddball ephemera already knows, the 25 years of culture that pre-dated consumer world wide web adoption (1969-1994) was knee-high in ridiculous, homespun, privately-pressed LPs and tapes. There were an untold number of weird, untalented and often strangely compelling hustlers out to make it in “the biz”, without having the slightest idea how to proceed, yet still having enough wherewithal to get into a recording studio, or to roll the tapes at home. Think Harvey Sid Fisher. Think Shaggs. Think the entire song-poem brigade, and countless other lesser lights.

In the early 1990s, some pals of mine became very smitten with a modern troubadour named KEN DEFEUDIS and his one-song 1990 cassette single “Run For Cover Lover”. You need to listen to it, even for just a minute, before you proceed further.

This song was a staple of certain San Francisco/Oakland house parties I attended, usually well after an exceptional number of drinks had been consumed. I hadn’t thought about it, nor DeFeudis, much for decades until it sprang back to mind last week and I decided to “Google” it. It turns out it wasn’t just my ne’er do well friends who were obsessing over this guy and his ear-grater of a song. Amazingly, the guy’s even in the “Songs in the Key of Z: The Curious Universe of Outsider Music” book.

I remembered a few conversations from back then with Grady Runyan, who was the prime mover in my memory among the DeFeudis ultra-faithful, and I recollected that he’d actually gone so far as to call the guy and talk with him, even getting additional tapes mailed to him as one point with new DeFeudis songs (!).

Grady’s now the founder/owner/manager of Grady’s Record Refuge in Ventura, CA; you may also know him from his stints in bands such as Monoshock, Liquor Ball, the Bad Trips, Cardinal Sin, Sternklang, the Umbilical Chords and others. I figured he’d be able to add to the DeFeudis lore that’s already collecting on the internet, and therefore sat him down for the quick email Q&A that follows.

How did Ken DeFeudis’ music come into your life? What made your attraction to it so instant?

I received my RFCL cassingle from Rubin Fiberglass, who was working at a music distributor in SoCal at the time….there were a handful of promos circulating in his warehouse, and he figured I’d dig it.  He was right. I played it for my roommate Christopher Junker and a certain fascination developed, which was further fueled by other’s dismay at our relentless wee-hour plays. Christopher and I were also doing these inebriated sound collages in the living room at the time, with record players, tape decks, TVs, etc. and KDF was always an ingredient in those. There was definitely a WTF factor. The music plus the cover picture plus the notes on the back…..was it a put-on or not?  I’m usually attracted to things like that, for whatever reason.  Part of me did not want to know more.  The other part me decided to call him one night (his number was printed on the cassette).

You drunkenly called the guy one night, and actually got him to talk to you, right? What was that like? Did you correspond further after that?

I called him but got his answering machine. Kinda forgot about it after that.  Amazingly he did return my call some weeks (months?) later.  There was a party at my house and Cardinal Sin was playing in the living room. Christopher answered the phone and started yelling “it’s DeFeudis, it’s Defeudis!!”  So the set was interrupted as I took the call.  First thing he did was apologize for calling so late, but explained he kept “musicians hours”.  It was well past midnight where he was calling from.  We probably talked for 15 minutes or so but the details are pretty fuzzy now.  I remember him being very serious abut his music and thanking me for my interest.

I remember you saying that after you’d made contact with DeFeudis, he sent you some more gems, including his follow-up, “Rookie Lover”. What were those recordings like?

I don’t remember this at all.  Have to check my tapes. (editor’s note: I know I’m not making this up. Anyone have a “Rookie Lover” tape they can MegaUpload for us all?)

What involvement did you have in birthing the late 90s Oakland band The Run For Cover Lovers, who took their name from DeFeudis’ hit?

That was my roommate Darryl Pretto’s band.  I wasn’t involved, other than having exposed him to the song many years before……going back a bit, when Blackjack out out the Cardinal Sin LP “Doggyhead”, they printed the band name on the spine as “The Run For Cover Lovers” without the band’s knowledge.  I think Darryl may taken the name from that prank as much as the original song.

Christopher had a friend named Brian Blesser, who was an artist in Berkeley.  Brian came over on occasion and was exposed to our fascination with KDF.  When Amoeba Berkeley opened, Brian was hired to paint the collage/mural above the entrance to the store.  He got Ken’s face in there, centrally located.  I think only handful of us knew, or cared.  It remained for many years and might still be there…..
(Grady subsequently emailed this picture. Yes, there he is, top right, with his hair touching the pink streak) 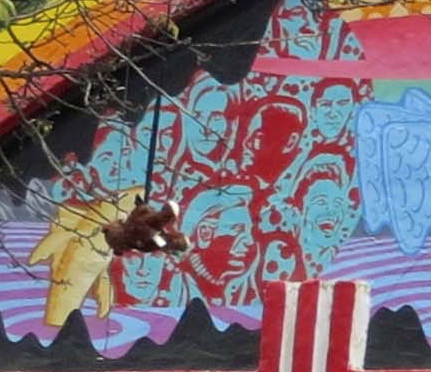 Thanks very much to Rubin Fiberglass for the initial find; to Grady Runyan and Chris Junker for the small-batch popularization of DeFeudis’ music; and to Grady again for taking the time to help add some perspective to a pretty timeless piece of music.

7 thoughts on “Running For Cover – The Ken DeFeudis Story”